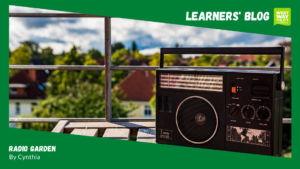 It’s fun to hear what sort of music is played in different places. ‘Heavy metal’ is very popular in Russia and Sweden, but when I move to my hometown in the USA, I hear lots of country music and rock and roll. My daughter-in-law takes a virtual trip to her town in Colombia to listen to some of her favourite Latin tunes.

Talk radio is popular too. You can listen to English being spoken with different accents from Scotland, Ireland, the US, Australia, the Caribbean – it’s all English! I also use it to improve my Spanish and French, and my nephew is trying to learn Russian, so he listens to stations from St Petersburg in the west to Vladivostok in the east.

If you don’t mind where you go, take your fingers, spin the globe and then listen in wherever you land. It’s easy to see why it’s called Radio Garden – many ‘flowers’ bloom in the world of radio.